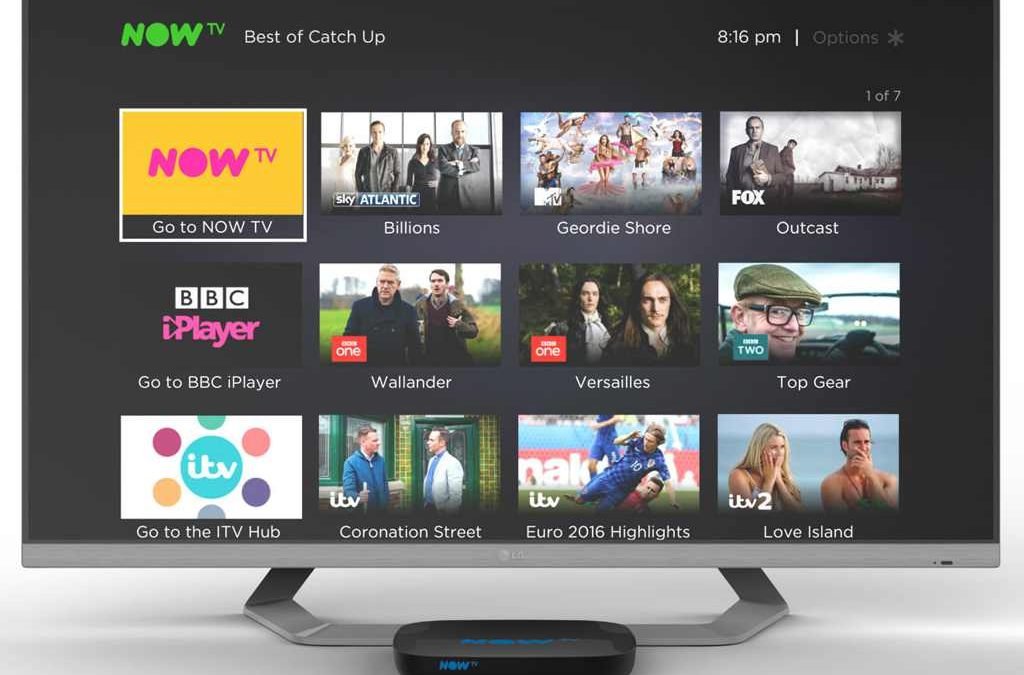 If you want access to Sky’s content but don’t want a satellite dish, another set-top box or a lengthy contract, Now TV is the answer. It is essentially pay-TV on a rolling monthly basis streamed over the internet by Sky.

The interface is fairly easy to navigate and is responsive on more modern devices. The service is broken down into five monthly “passes”, which can be bought individually or combined, and auto-renew each month unless cancelled. These provide streaming access to live channels and on-demand content that aren’t available on Freeview.

The £8.99 Entertainment Pass has 300 TV box sets plus 17 live streaming TV channels including Sky Atlantic. The £11.99 Sky Cinema Pass has 11 of Sky’s movie channels plus thousands of on-demand movies. The £33.99 Sky Sports Pass has all 11 Sky Sports channels but can also be bought per day at £9.99 too. The £3.99 Kids Pass has six kids’ channels and thousands of ad-free children’s shows on demand. The £3.99 hayu Pass has US reality TV shows.

All content is streamed at up to 720p HD resolution with a minimum required broadband connection of 2.5Mbps or 450Kbps on 4G.

Six devices can be registered at any one time and up to two screens or devices can be used simultaneously for easy multiroom access. The £3 Boost add-on increases the maximum streaming quality to 1080p HD, adds Dolby 5.1 surround sound and a third concurrent stream. It is worth noting that a Chromecast counts as two devices, the phone controlling it and the actual Chromecast.

Parental controls can be enabled, requiring a pin to start watching live channel streams and filtering on-demand content by age restrictions.Sky has its own Now TV Smart Stick (£24.99), which streams Now TV, plus UK catchup apps, Netflix and Disney+. But Now TV works on a wide range of third-party devices, including some Samsung and LG TVs, PS4, Xbox One, Apple TV, Chromecast, Roku, YouView, Android, iOS, macOS and Windows. You can download shows for offline viewing on smartphones and tablets via wifi too.The primary downsides are that you can’t get Now TV in 4K, HDR or with Dolby Atmos, not all devices support the Boost add-on for 1080p streaming and without it the streaming frame rate can be below 50 frames per second, which in theory can make fast-moving action such as sports a bit jumpy and jarring if your TV doesn’t have motion-smoothing to compensate.
Share
14